John Lennon's Sunroom was decorated with various pictures, caricatures and stickers, such as the one from the Safe as Milk debut album (1967) by Captain Beefheart & His Magic Band, and one advertising the Monterey Pop Festival. The shelves of the sunroom were filled with articles such as a large ornate cross, a Mickey Mouse doll and a mortar and pestle, reportedly used by Lennon to mix various combinations of cocaine, amphetamine, barbituates and LSD. There was also a bergere rattan sofa upon which Lennon would spend much of his time... 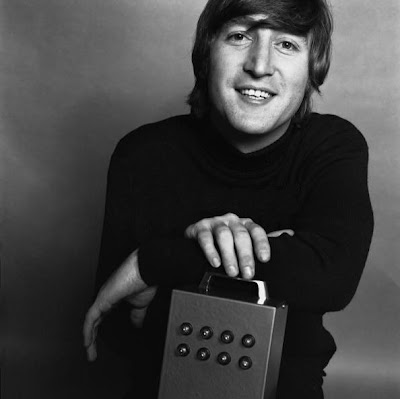 John Lennon with The Nothing Box - March 1966 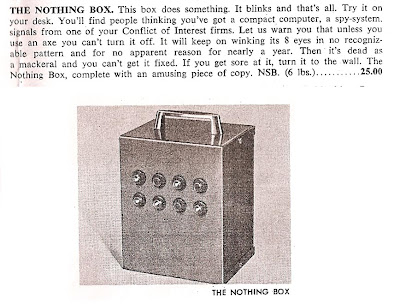 An advert for The Nothing Box 1966

John Lennon met Magic Alex (Mardas) in 1967 an inventor of "The Nothing Box" when some of Alex Mardas' kinetic light sculptures were on display at the Indica Gallery (incidentally, the Indica is where John & Yoko first met). John was particularly taken with Magic Alex's "The Nothing Box," a plain box adorned with blinking lights that JL enjoyed staring at while tripping on acid..
Newer Post Older Post Home